On Twitter, His Highness Sheikh Mohammed bin Rashid, Vice President and Prime Minister of the UAE and Ruler of Dubai, wrote that “today, we saw humanity and tolerance unfold through a great job of the ERD Crescent’s operation that distributed our citizens together with Filipino residents to provide aid to families affected by the Taal volcano in the Philippines”. 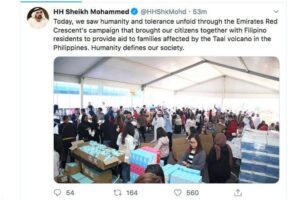 Today, Filipino government authorities stated, that the biggest major explosion at Taal volcano no longer seems imminent, although residents are being cautioned that they should remain ready to flee.

Since the volcano erupted two weeks ago, approximately 135,000 people have been forced to take shelter in evacuation centres.

Following the January 12 explosion – which sent ash as high as 15km into the sky – seismologists warned that a much bigger explosion was possible, posing danger to anyone with a 14-km danger zone.

Sheikh Mohammed also tweeted and showed solidarity by saying “Pray and wishing well go out to the people of Philippines after the eruption of the Taal volcano,” he wrote on Twitter. “Asking god and pray that these tough times are over with the least losses. Emirate always been supportive with many countries and today with the Philippines in these difficult times and is ready to provide all support and assistance.”