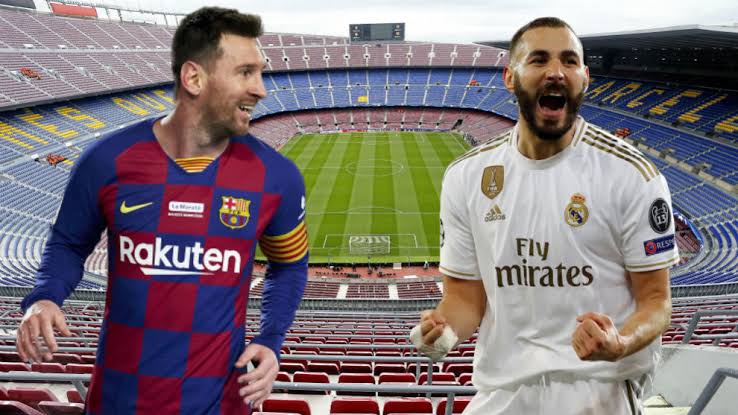 Barcelona and Real Madrid have carried on one of the world’s most intense rivalries for decades now. Hatred of the opposition runs bone deep. Both the teams have played legendary football throughout the history.

Real Madrid has 32 league trophies ever since the league was created. Barcelona on has 24 trophies, 8 less than Real Madrid. It wouldn’t be a shocker if Real Madrid would continue their record and add another league trophy into their cabinet.

There can be different aspects of measuring a club’s greatness especially when the clubs are two of the greatest of this generation.  With Fans mixed feeling of winning and losing, but both with hope to mark another history for Spain two strongest league which we are about to discover tonight.

Each club, player have their own values, wins. If you look at the matches played between the two under El Clasico.

However Real Madrid are on fire this season. They sit second in La Liga on 35 points, joint top with Barcelona but Barcelona have scored 10 more goals than them. They are unbeaten in 11 games.

While Barcelona with Messi on other hand have much real chance to win this Clasico, in opposite Real Madrid have lost Cristiano Ronaldo which leave the filed empty to target by Barcelona and more chance to advance their plan of victory.

All we can say is that both of them in their own respect have complete mastery over their own sets of basics. And that is what sets them apart.

Barcelona set to win the game by 2-1 for Real Madrid, which predicted by most of the fans in Europe and around the world.

The rivalry between them is mostly manufactured by media that either support one team or another, which sometimes could turn to heat or hatred.

In the same way social media shape our views on politics, science and many different things. The problem with social media is that it makes people misinformed, or only half-informed instead of thoroughly informed by giving your perspective from many different angles.

Fans wishing on both side to have their winning team as a Christmas present, which will be very exciting to watch tonight.

UAE’s first opera will be sweeping historic drama of survival

Government launched a Guide to Happiness and Well-being